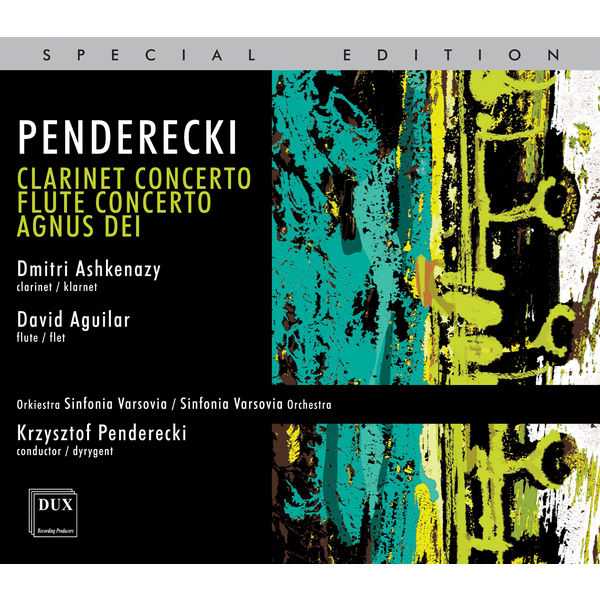 Pretty gloomy stuff, these three works by Polish post-modernist composer Krzysztof Penderecki are also pretty small beer. Of course, Penderecki has always been gloomy — any composer whose signature work is the Threnody for the Victims of Hiroshima of 1959 is going to tend toward the dark side. But since he stopped writing in the style of his the Threnody, Penderecki’s searing atonality and “sheets of sound scoring have settled into stodgy chromaticism and stolid string writing. For diehard fans of post-Modernism, it’s as if Boulez had reverted to Debussy or Stockhausen reverted to Brahms. But even those with an interest in Penderecki’s later style may not be altogether persuaded by the works included here. The earliest, a chamber orchestra-sized rescoring of the originally choral Agnus Dei from 1981, sounds like a slowed-down and enormously simplified Adagio by Bruckner. The next, the Flute Concerto dedicated to Jean-Pierre Rampal from 1992, sounds like a leaner, meaner but nowhere near as interesting Flute Concerto by Nielsen. The most recent, a 1997 arrangement for clarinet and orchestra of the Viola Concerto from 1983, sounds like a harder, hasher but thankfully nowhere near as despairing Clarinet Concerto by Pettersson. Both soloists — clarinetist Dmitri Ashkenazy and flutist David Aguilar — are brilliant virtuosos and clearly deeply dedicated interpreters of these works. The Sinfonia Varsovia gives everything it has to the composer on the podium, who in turn gives everything he has to the music. Whether it works or not is up to the listener. Dux’s sound is clean and clear enough, but like the music, it lacks warmth.