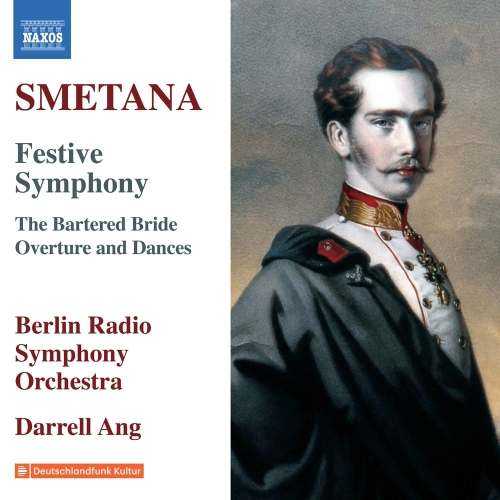 Bedrich Smetana’s ‘Festive Symphony’ was composed in 1854 when hopes for Emperor Franz Joseph becoming King of Bohemia were high. The splendid sounds of Smetana’s only formal symphony pre-echo later masterpieces such as ‘Ma Vlast,’ but his use of the Austrian Imperial anthem became unacceptable in the subsequent spirit of Czech nationalism, resulting in the work’s neglect. With its sparkling overture and lively rural dances, ‘The Bartered Bride’ secured Smetana’s international reputation and, as the only Czech opera of its day to enter the standard repertoire, it became a beacon for the nation’s 19th century musical renaissance. Conductor Darrell Ang is the artistic director and chief conductor of China’s Sichuan Symphony. He regularly conducts orchestras across the world, including the Rundfunk-Sinfonieorchester Berlin. Ang’s first album for Naxos was nominated for a Grammy Award in 2016.