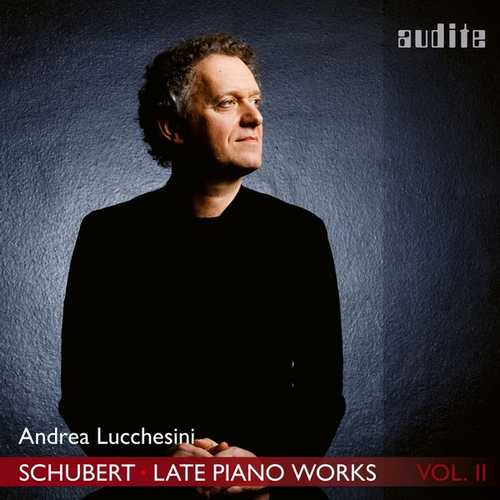 Andrea Lucchesini is discreet and his career is sometimes overshadowed by the other Italian pianists, whose works are more favored by the press. Lucchesini studied under the masterful Maria Tipo. He was one of her most brilliant students, along with Nelson Goerner. In Italy, he performed many concerts and recorded numerous albums. He first achieved recognition with his performance of Luciano Berio’s music, the concerto Echoing Curves in particular that he played under the conduction of the composer himself. Lucchesini also recorded Beethoven’s sonata collection for the label Stradivarius.

In recent years, Lucchesini found in Schubert a travel companion that he sometimes refers to as his “true love.” Andrea Lucchesini is fascinated by Schubert and Beethoven, two composers who, at the beginning of romanticism, remained so different. His album, a second volume of recordings, is dedicated to Schubert’s late work. The pieces mark Schubert’s return to sonatas, after a long period of composing lieder. At that time, Schubert and Beethoven lived in the same city.

For Lucchesini, Schubert remains a mystery. He left almost no writing. He never settled and no one understood his shyness, constant agitation and latent homosexuality. “Rediscovering his late work has shown me the difference between the artist who entertained his friends and the composer working in solitude, without any hope of being published or performed.” After an album dedicated to the Sonata in A Major, D. 959, Lucchesini returns with Schubert’s ultimate sonata. The composer wrote the piece at the dusk of his life, a life destroyed by sickness and disappointment. Nevertheless, in the midst of tears and sorrows, Schubert still managed to bring smiles into the music.