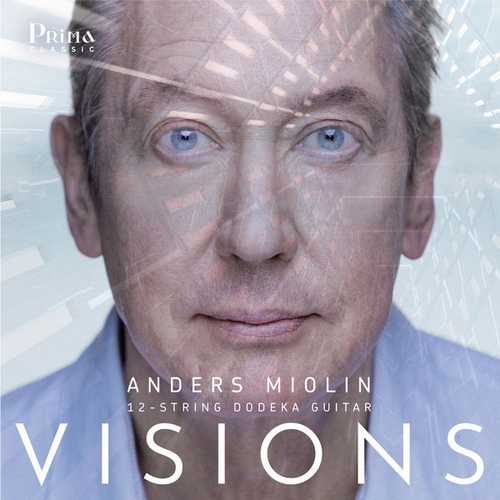 In this new album, Anders presents a world premiere recording of his original compositions in a new style that could be calledechoing Anders’ own words”Imaginism”.

“Imaginism” was a Russian avant-garde poetic movement starting after the revolution of 1917 it was known, for example, for poems without verbs that evoked a more powerful emotional impression. The compositions included in this album were created in the second half of 2020 in symbiosis and dialogue with my unique instrument the 12-string DODEKA guitar, to date the only one in the world. In spite of this I always hear and think beyond the instrument, composing for an orchestra of universal sounds. Although the pieces can be described, it is important to let the poetry speak for itself experiencing the emotional imagery rather than “understanding”.

Anders Miolin was born in Stockholm and studied at the music academies in Copenhagen, Malm and Basel. He is professor of classical guitar at Zurich University of the Arts, Switzerland, receiving international acclaim as a performer, teacher, recording artist, arranger and composer. He has released eleven albums with internationally renowned labels. “Romantic” is the second album in a long series of captivating thematic recordings to be released in the coming years with PRIMA CLASSIC. The highly distinguished artistry of Anders Miolin is characterized by a unique instrument, unique programs and a unique sound. Anders Miolin is a cosmopolitan in styles whilst continuing and developing the guitar tradition. His programs span from the Renaissance to contemporary music, with a daring twist of improvisation. As an arranger and composer, he aims to create exciting and timeless soundscapes beyond the everyday experience, searching to evoke emotion and phantasy in the listener. His philosophy is to contemplate the human life as a journey through time, space, and experience always with appreciation for the moment’s beauty. This way, his compositions explore the life as an Odyssey. Anders Miolin performs on the unique 12-string guitar DODEKA, his creation of a sound universe beyond the ordinary, built by the Swiss luthier Ermanno Chiavi.