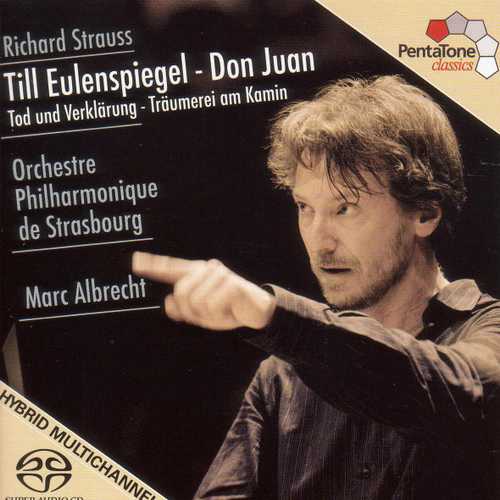 This is the first release in a new collaboration between PentaTone and the Orchestre Philharmonique de Strasbourg. These great Strauss Tone Poems need no further recommendation than to say they are superbly played. Highly recommended in stunning surround sound.

Directing the Orchestre Philharmonique de Strasbourg, Marc Albrecht turns in a perfectly acceptable disc featuring three of Strauss’ most popular tone poems — Don Juan, Death and Transfiguration, and Till Eulenspiegel — along with a relative rarity: Dreaming by the Fireside from the opera Intermezzo. “Acceptable” here means well enough played and well enough conducted. The Strasbourg musicians clearly have the technique to play these immensely difficult works. Their violins are up to Don Juan’s devil-may-care opening, their brass up for Death and Transfiguration’s heavenly climaxes, and their winds are clearly enjoying themselves thoroughly in Till Eulenspiegel’s slapstick episodes. If collectively they do not match the virtuosity of the Berliner Philharmoniker or the warmth of the Wiener Philharmoniker, the Strasbourg Philharmonic has its own lean, clean sound that is still quite appealing. Albrecht leads tightly controlled performances, never letting Strauss’ imagination run away with itself but always striding confidently toward each work’s ultimate climax. It’s true Albrecht has nothing new to say about these orchestral warhorses. His Don Juan throbs, his Till Eulenspiegel laughs, and his Death and Transfiguration roars, but so have Dons, Tills, and Deaths from Furtwängler, Krauss, Böhm, Reiner, Kempe, Klemperer, and Strauss himself , and all of them have unique insights into the works’ characters. Albrecht, an obviously skilled and talented conductor, stimulates the music, but despite his best efforts, he cannot bring it to life. The rarity Dreaming by the Fireside is a string-drenched piece of sentimental nostalgia from the 1924 opera that gets an appropriately tender-hearted treatment from Albrecht and the Strasbourg orchestra. PentaTone’s super audio sound is clean, colorful, and very vivid.