Albrecht: Korngold – Symphony in F sharp, Much Ado about Nothing (FLAC) 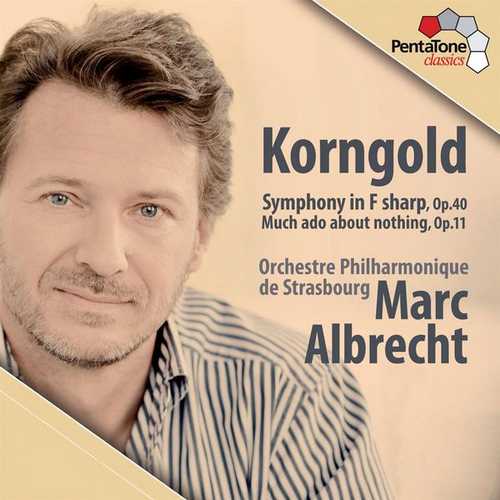 Albrecht: Korngold – Symphony in F sharp, Much Ado about Nothing (FLAC)

Korngold began working on his 1st symphony in Vienna in 1951 and completed it in 1952. The work summarized his whole life, which had been lived between two worlds: opera and film and between Europe and the United States. It was intended as a tribute to his “refuge” America and was dedicated to President Roosevelt. Albrecht has been acclaimed for his commitment to 20th century music.

Premiered in 1954 with poor results due to insufficient rehearsal time, Erich Wolfgang Korngold’s Symphony in F sharp didn’t become part of the concert repertoire until the 1970s, when it was finally received by audiences as a neglected masterpiece. A late work in the post-Romantic vein that is full of drama and lyricism, the symphony showed Korngold’s resistance to avant-garde twelve-tone composition and the international serial school, which he regarded as disastrous to music. However, his score crosses into modern territory with its sharp dissonances, angular melodies, and hard percussive edge, yet it remains true to the composer’s richly chromatic but recognizably tonal methods. This 2010 performance by Marc Albrecht and the Orchestre Philharmonique de Strasbourg is especially vivid and bold sounding, thanks to the great hybrid SACD presentation by PentaTone, which omits no details and gives the symphony a depth and sonic splendor that other recordings fall short in reproducing. The symphony is backed with Korngold’s incidental music for Much Ado About Nothing, composed in 1918 for the Shakespeare play and then organized into the symphonic suite heard here. The tone is lighter than the symphony, and the influence of Richard Strauss is quite strong in this youthful piece, even to the point of overt allusions to Till Eulenspiegels lustige Streiche in the overture. While this is enjoyable filler, the symphony provides the best reason to listen, and anyone who loves Korngold’s music should become familiar with it through this exceptional recording.